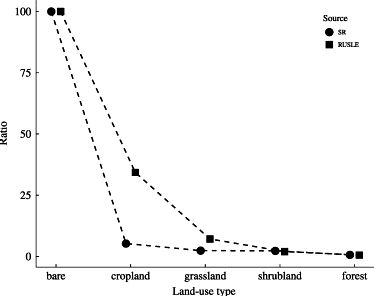 Within the Venezuelan Andes the standard method of cultivating coffee continues to be beneath shade, while using variety Coffea arabica var. arabica. However, since 1975 the federal government has promoted a big change from this kind of cultivation to ‘sun coffee’ which means the removal of shade trees and also the substitute of old coffee trees with varieties for example C. arabica var. bourbon and var. caturra. To be able to evaluate the potential effects of the switch to the soil erosion within the sloping coffee plantation, research was transported on around Canaguá, within the Condition of Mérida. The outcomes were acquired from staring at the successive lack of the mineral fraction and runoff, measured in plots located in (1) a 16–17 years old shade plantation, (2) exactly the same plantation in the foremost and second years following its transformation to some ‘sun plantation’, and (3) a 7 to 10 years old sun plantation. The outcomes reveal that: (a) Regardless of the bigger losses under the sun plantation, both kinds of management show really low erosion following the plantation is becoming established, (b) losing the mineral fraction under 4 mm represents the finest distinction between erosion under the sun and shade plantation entirely production, (c) the losses of < 4 mm fraction during the first year following implantation of sun coffee are four times greater than those found in the old shade plantation, and (d) there is a positive relation between erosion and human activities within the plantation, contrasting with a non significant correlation between erosion and runoff and rainfall erosivity.